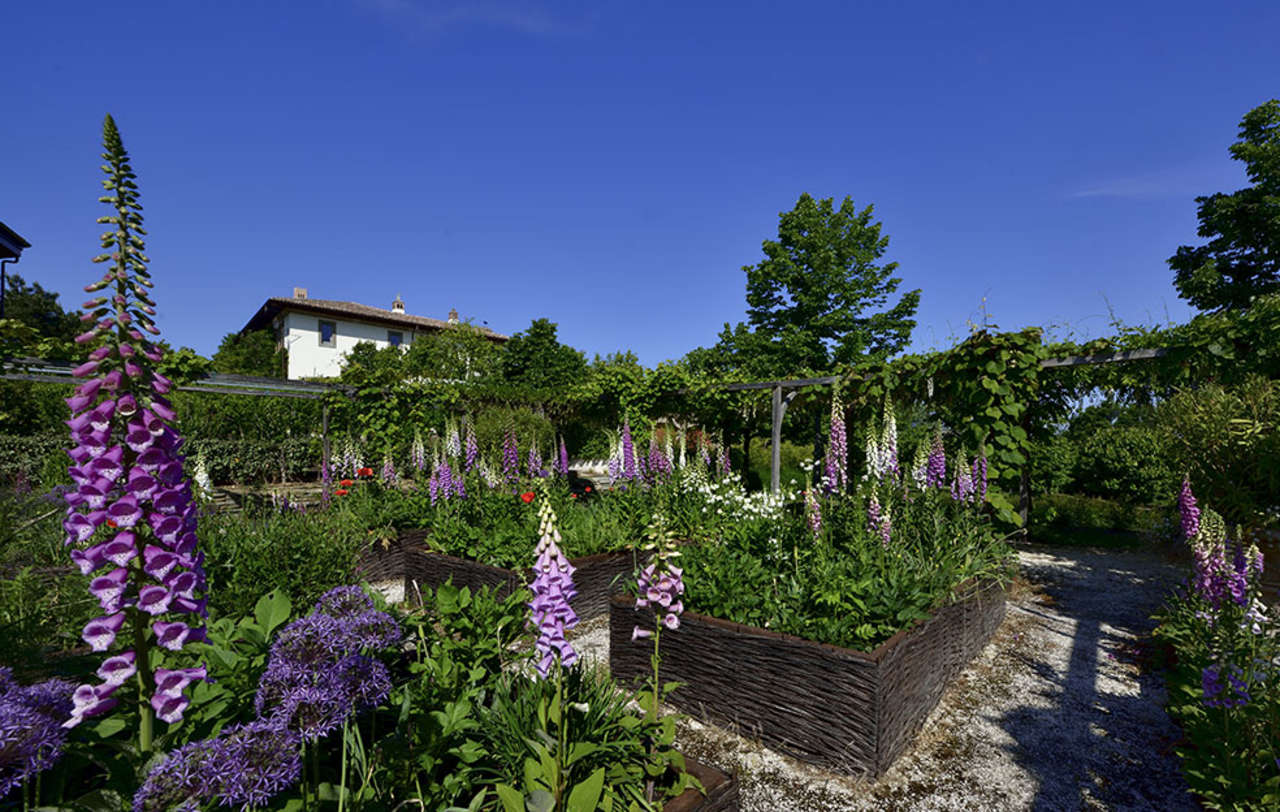 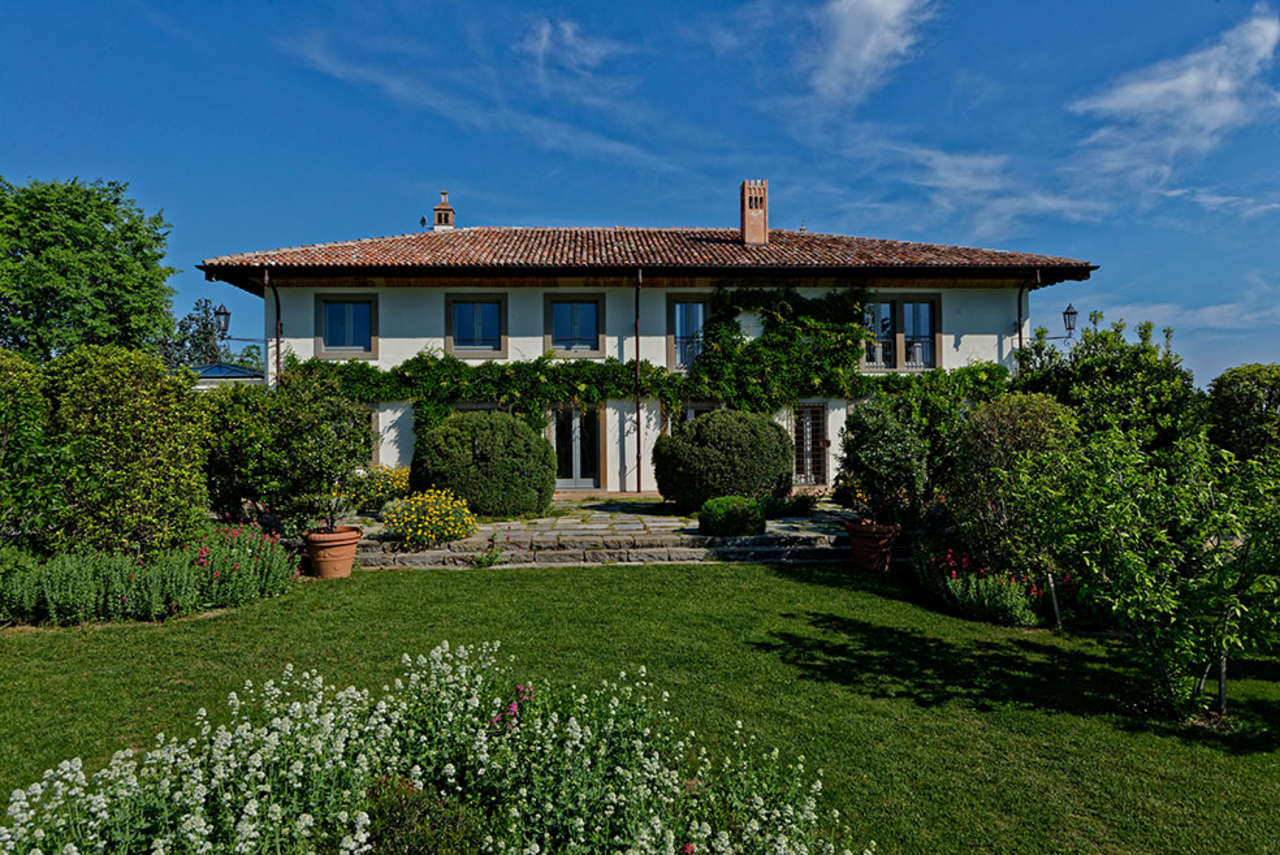 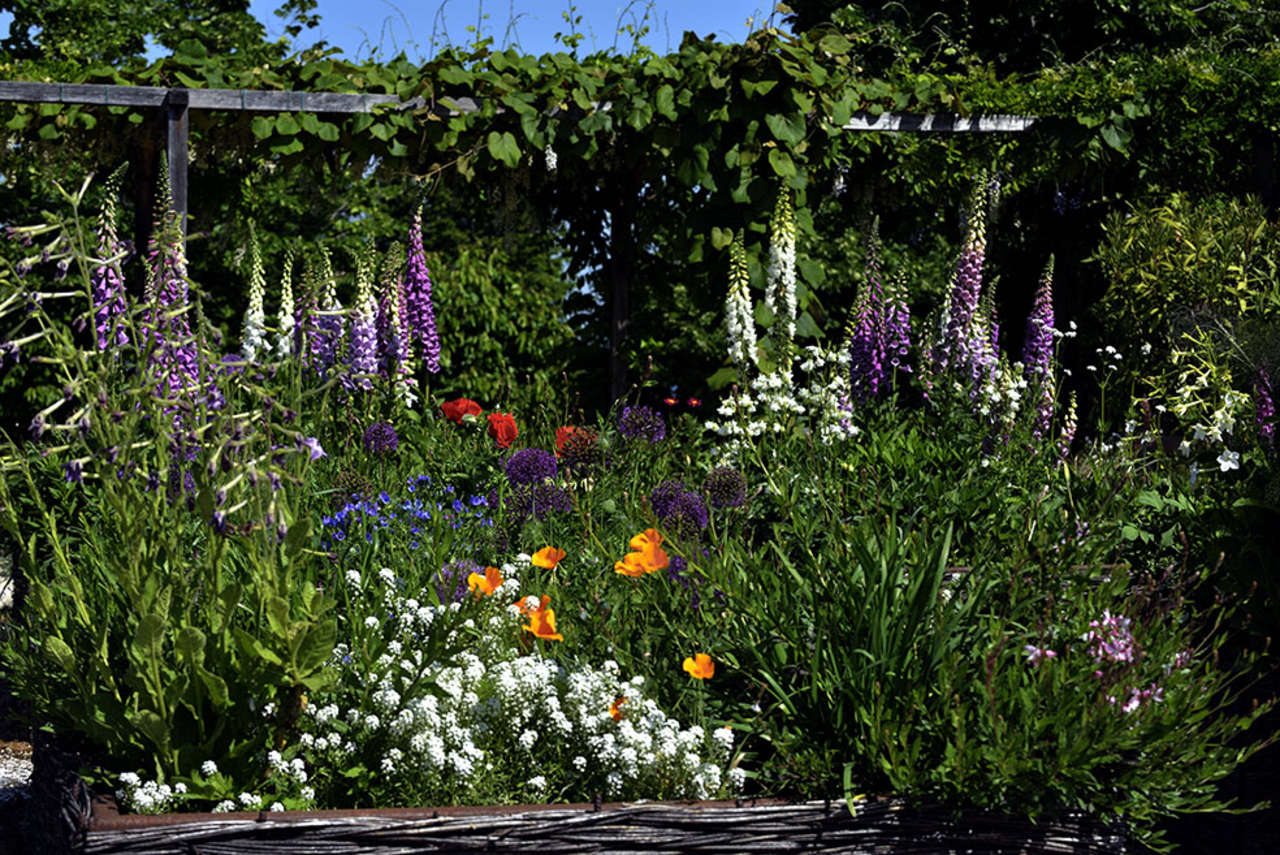 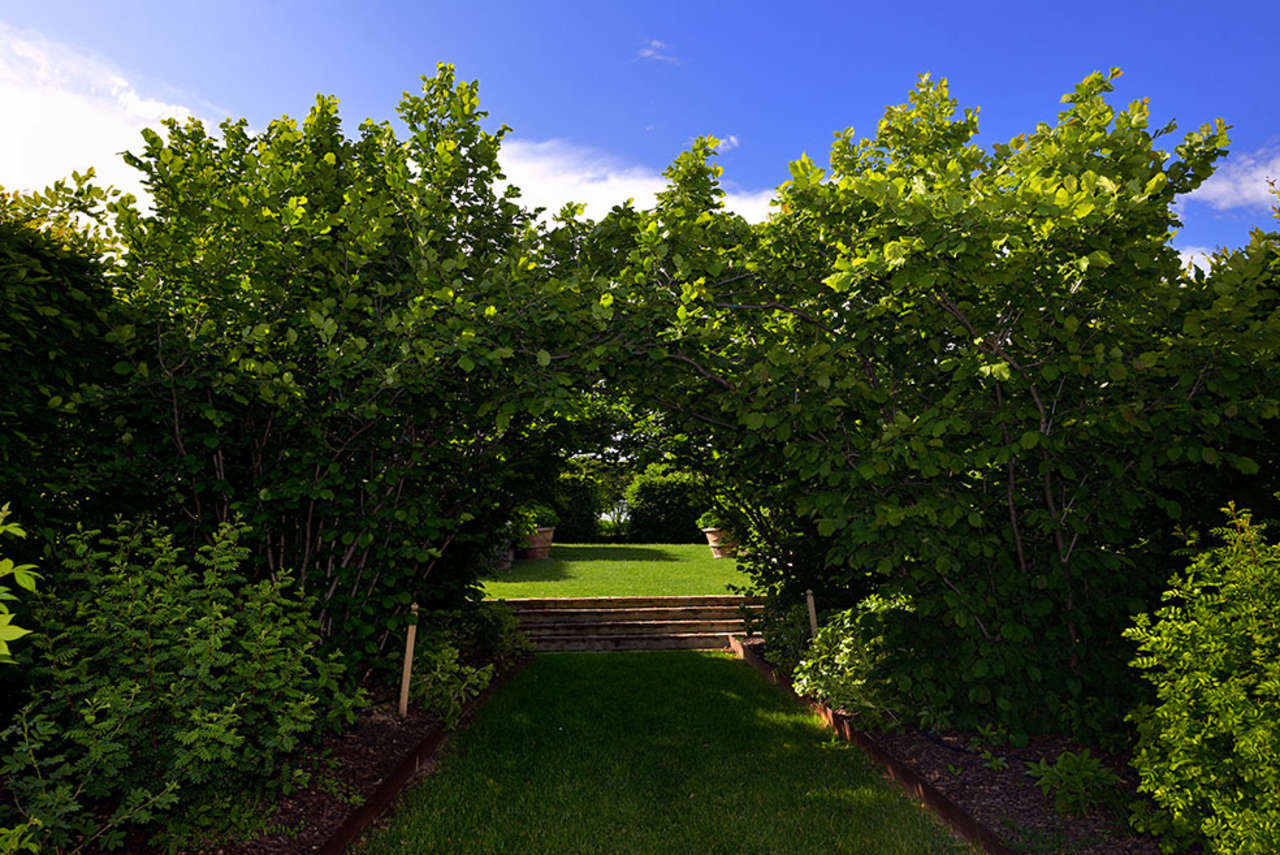 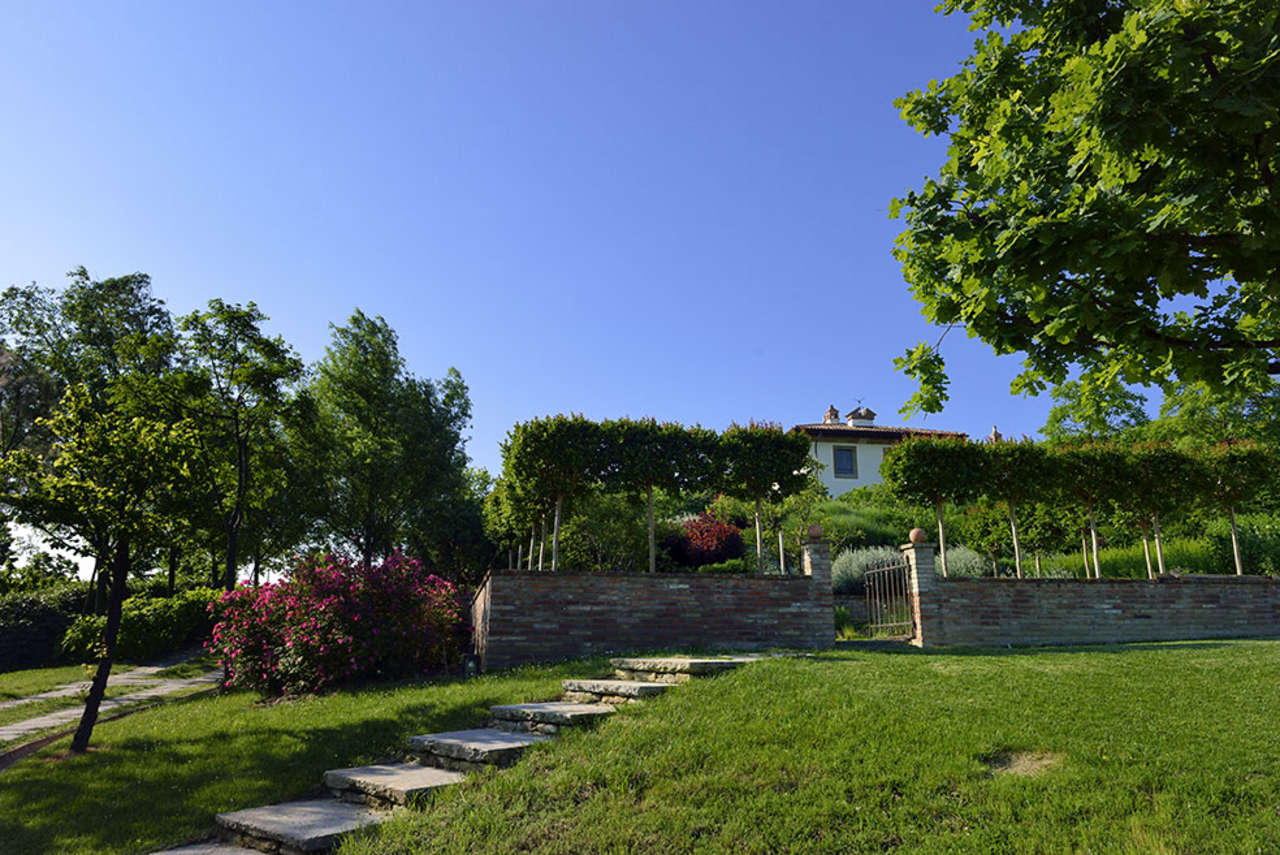 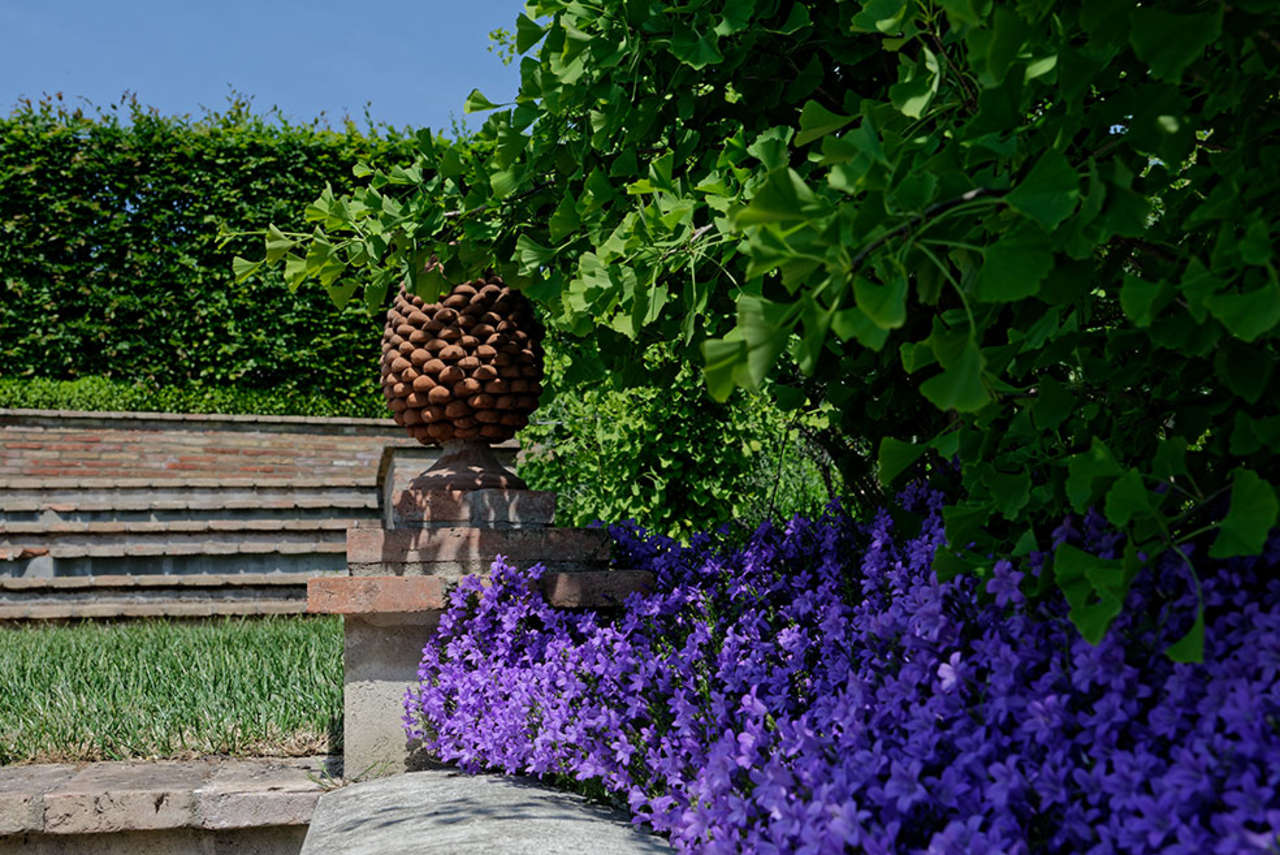 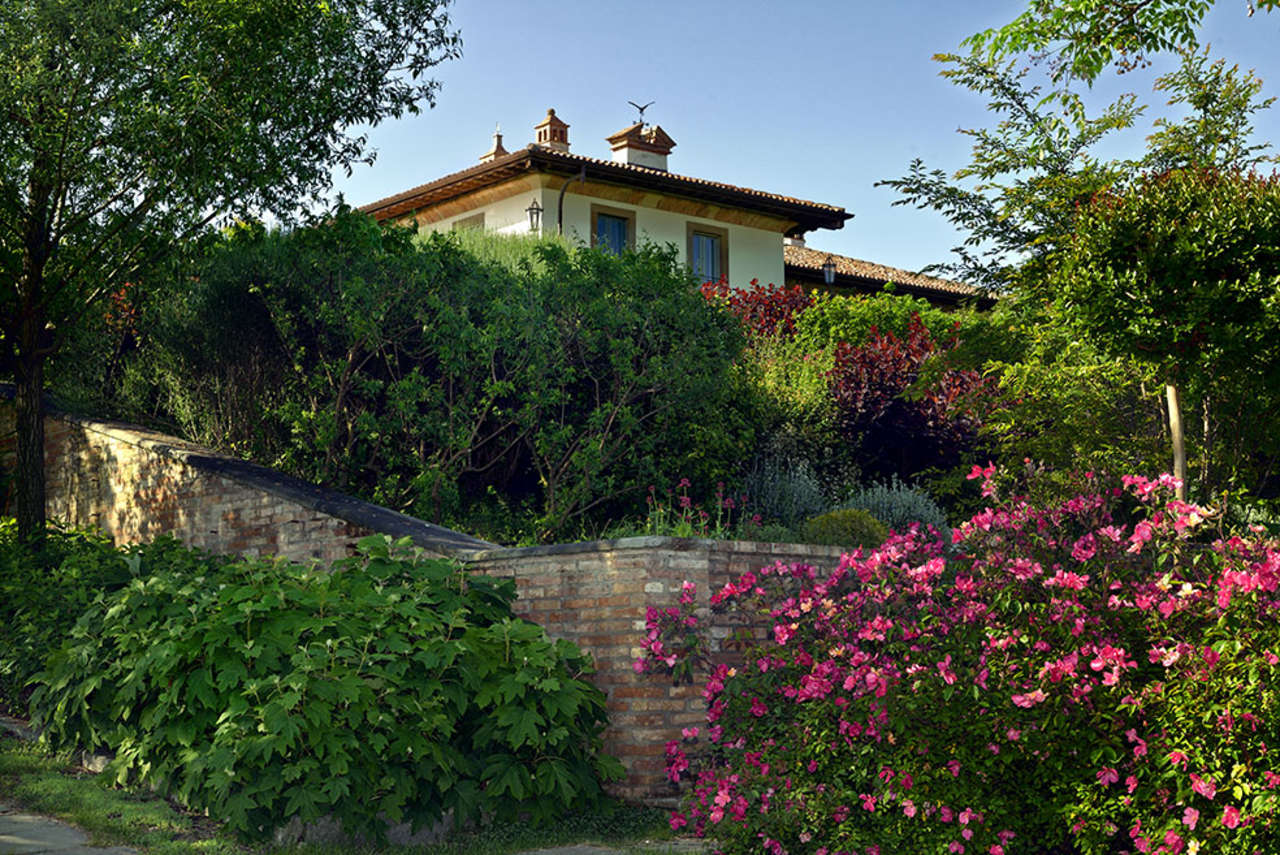 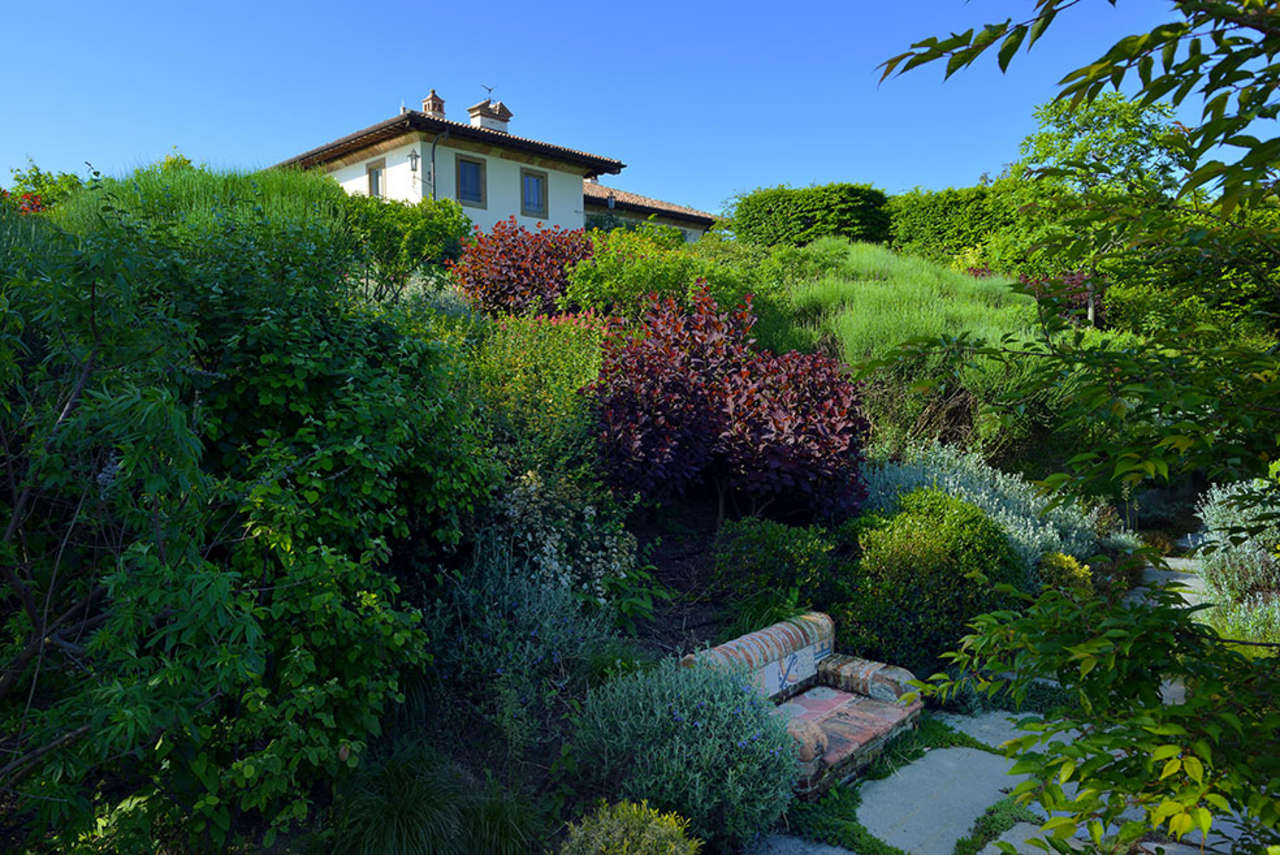 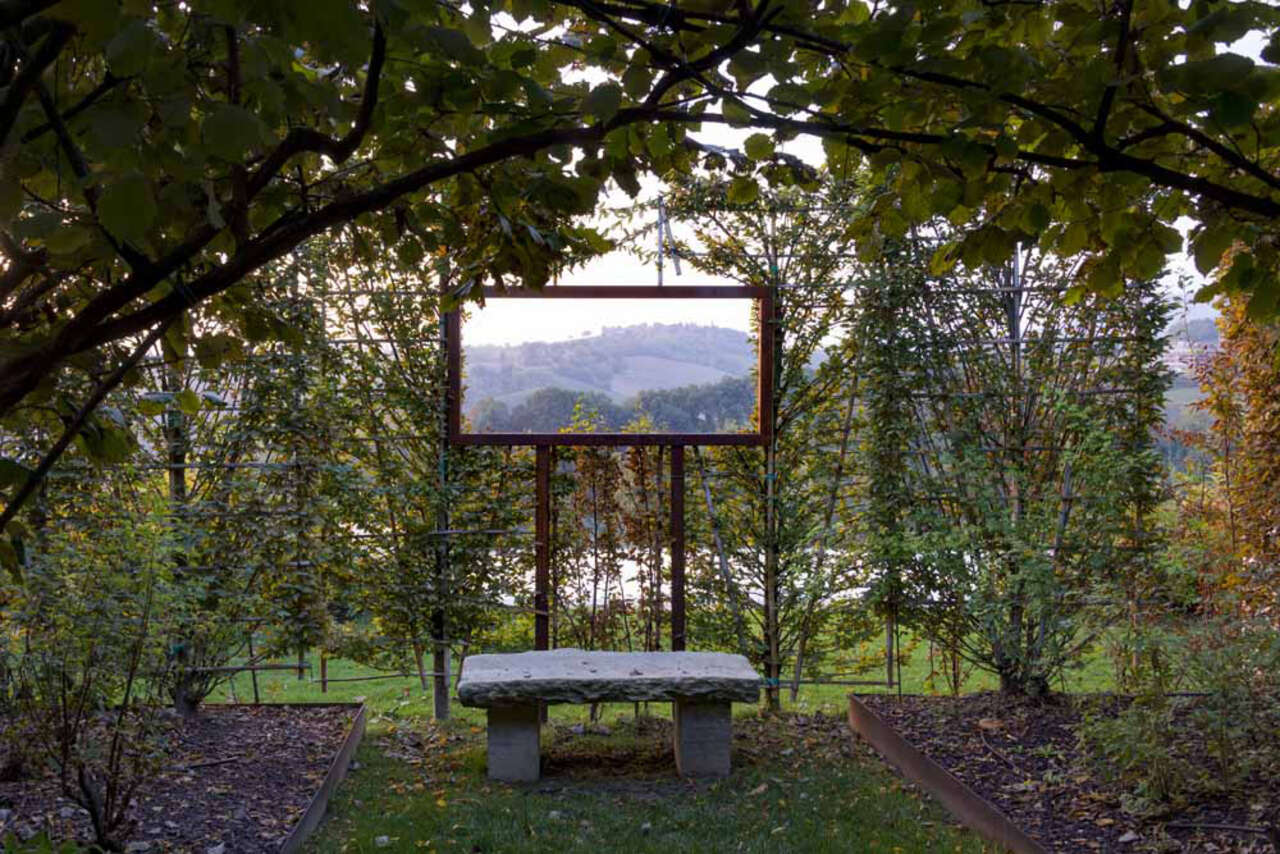 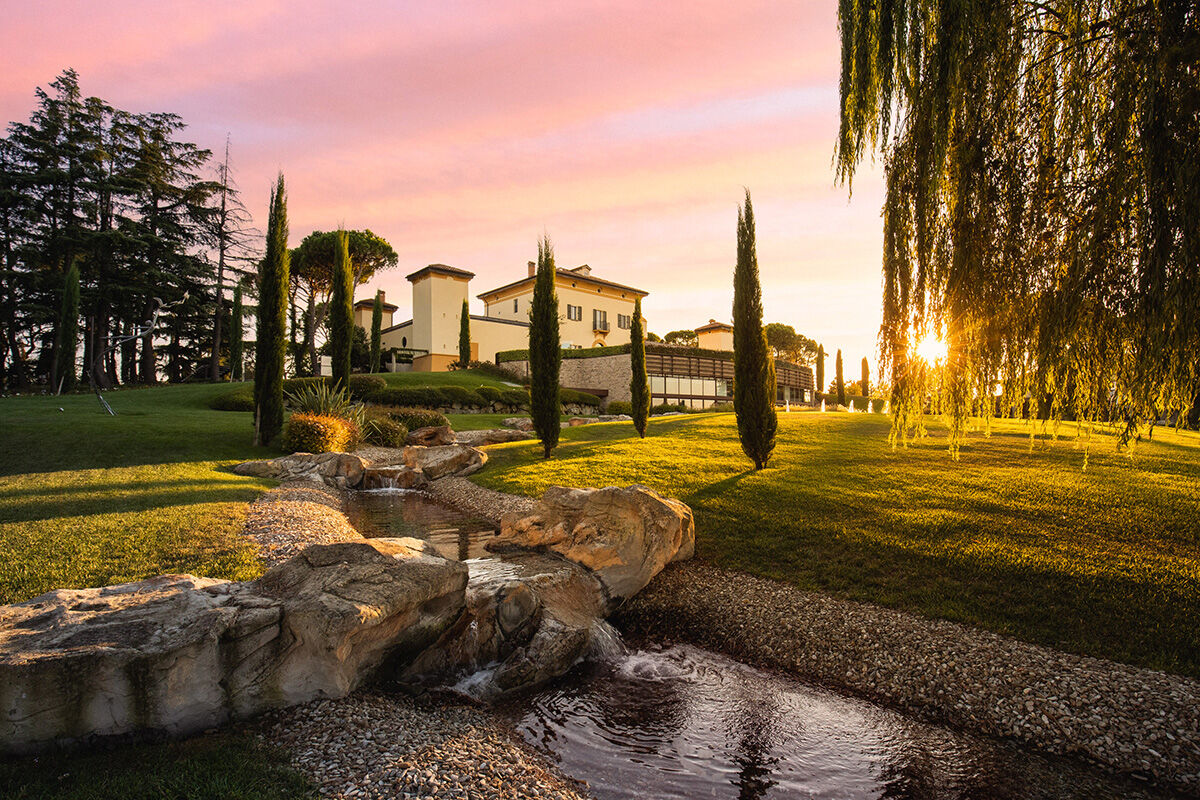 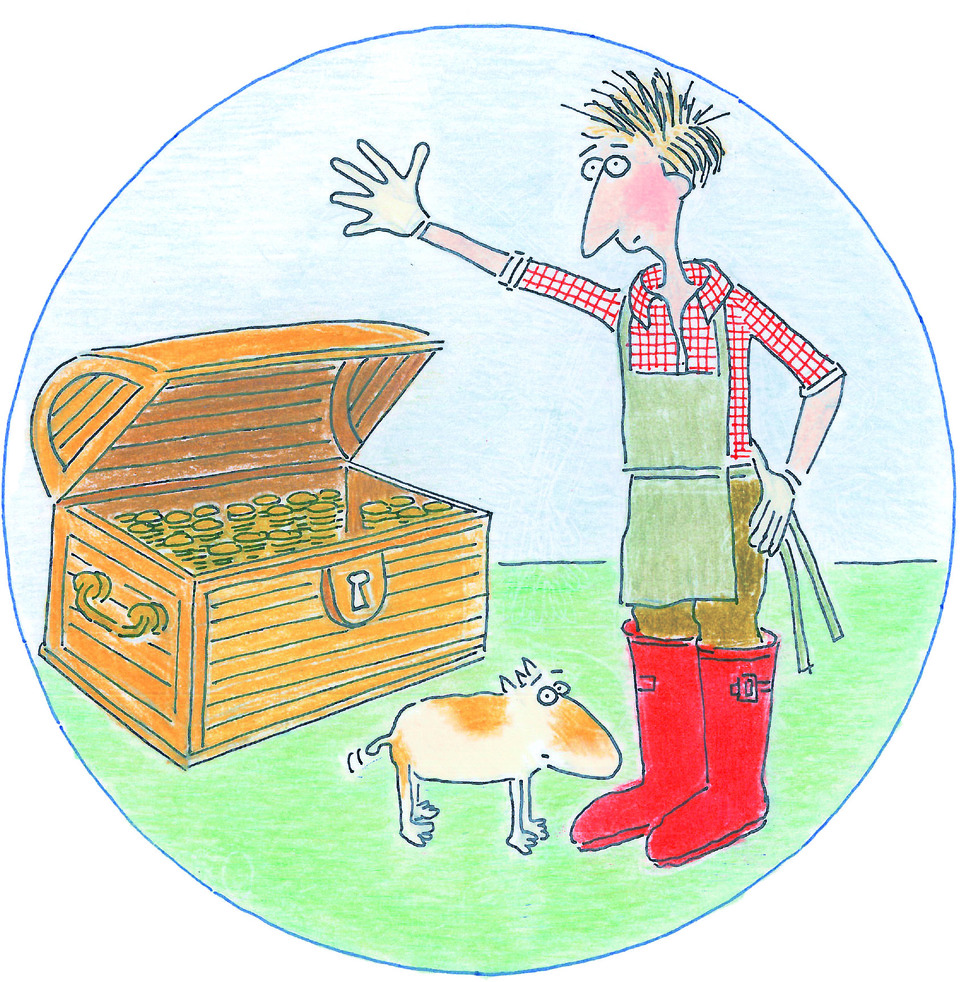 Immersed in the beautiful scenery of the Emilian countryside, Palazzo di Varignana's inspiring Garden was designed by landscape architect Antonio Perazzi who created a magnificent Garden where the countryside, nature and formal features come together with irresistible spontaneity thanks to low walls, terraces, stairs, fountains and a beautiful infinity pool.

Remarkable is certainly the collection of oak trees selected by Mr. Perazzi, for a total of 100 copies with 76 different species, one of the most important arboreal heritage in Italy. After passing a small forestal covered walk of ash trees and other nati- ve plants, one arrives at the Garden's first part where geometric theme rooms open into each other and are harmoniously divided by hedges of ginko biloba, hornbeam (Carpinus betulus) and rows of trees maple (Acer campestre) which accommodate the bushes of roses, grasses, ornamental cherry and dogwood (Cornus mas) offering a view that stretches over the picturesque landscape. Beyond the apple blossom gallery and the roses, a green labyrinth appears (Labirinto Carlico).
It's original plan was designed in 2015 from landscape designer Sandro Ricci who created the harmonious union of the Garden with the existing twenty-hectare park. The originality of the design of the labyrinth derives from the overlap of Ilatro hedges (Phyllirea angustifolia) and an existing orchard. In the heart of the park, the real ornamental Garden winds its way around the former country villa, embracing it on every side. The five bedroom villa is surrounded by numerous herbaceous species, Mediterranean trees and shrubs, abundant blooms of broom and fragrant osmanthus bushes.The private park of Palazzo of Varignana and its Garden enriched with seven olive trees Olea europea, secular examples from Southern Italy.

Palazzo di Varignana Resort & SPA is a prestigious, elegant venue in the Emilia countryside. An eighteenth-century villa, restored to its original splendour, is the setting for an exclusive location for relaxing stays or business events.
Discover

By car
Highway A14 (Ancona-Bologna): take the exit Castel San Pietro; turn left following the indications for the Via Emilia until you get to the crossroads for Castel San Pietro. Turn right following the indications for Bologna and drive on Via Emilia for about 8 km. Follow the traffic signs for Varignana on your left, cross the Varignana historical center and then follow the road signs for the Resort.
Highway A1 (Milan-Bologna): take the exit San Lazzaro di Savena, then take the first exit on the right and follow the signs for the road called “Complanare”. Take the last possible exit and keep the left at the traffic circle. Carry on until you find another traffic circle: again, take the third exit (on the left). At the second traffic light, turn right. Go straight on until you find a small bridge on the left: turn left on via Varignana and follow the road signs for the Resort.

By train
Bologna Centrale, Bologna's main railway station, is located 19 km from Palazzo di Varignana. A pick-up shuttle service from the station is available upon request.

By plane
Guglielmo Marconi International Airport (BLQ) is about 11 km from Bologna city center and 30 km from Palazzo di Varignana Resort & SPA; the Resort offers a pick-up shuttle service from the airport upon request*.
Possibility to use a private airfield 10 km from the Resort for both turboprop and jets.

Faenza
Information
Opening hours
Friday to Sunday, reservation required
Entrance
€ 15
Valid all year round for groups of at least 10 persons.
Guided tour of the ornamental garden.
Possibility of independent visit to the Wunderkammer and the Claternate Mosaic.

€ 45 (€ 25 tasting + € 20 garden visit)
Available every Friday and Saturday from 6:30pm
Guided tour of the ornamental garden and tasting of 2 glasses of wine and 2 extra-virgin olive oils with local products at the suggestive Palazzo di Varignana Winery.
Possibility of independent visit to the Wunderkammer and the Claternate Mosaic.

€ 84 (€ 64 lunch and winery visit + € 20 garden visit)
Available every Friday and Saturday
Guided tour of the ornamental garden, independent walk through the vineyard and natural amphitheatre, EVO oil tasting at the charming Palazzo di Varignana Winery and 3-course lunch excluding drinks at Aurevo Pool Restaurant.
Possibility of independent visit to the Wunderkammer and the Claternate Mosaic.

www.palazzodivarignana.com
Write to the gardenView the map