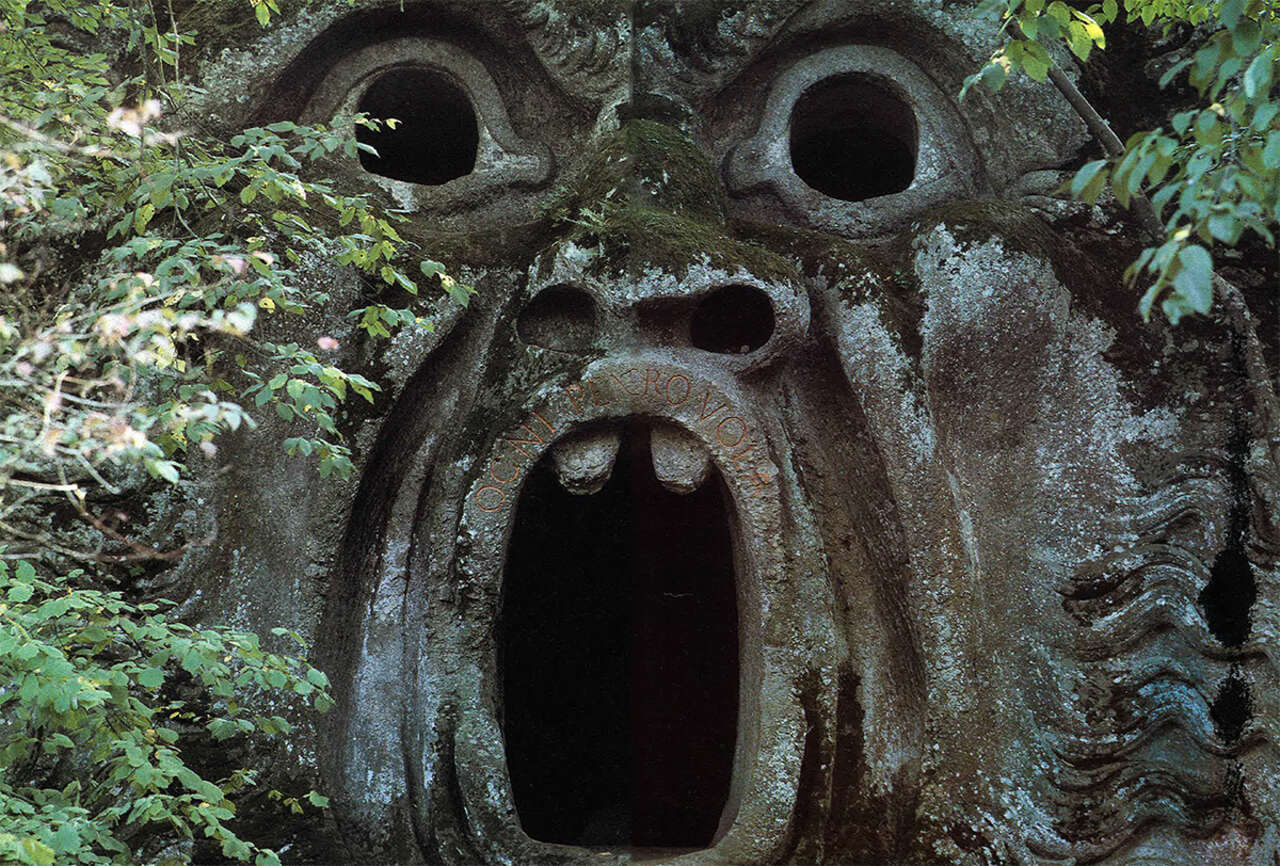 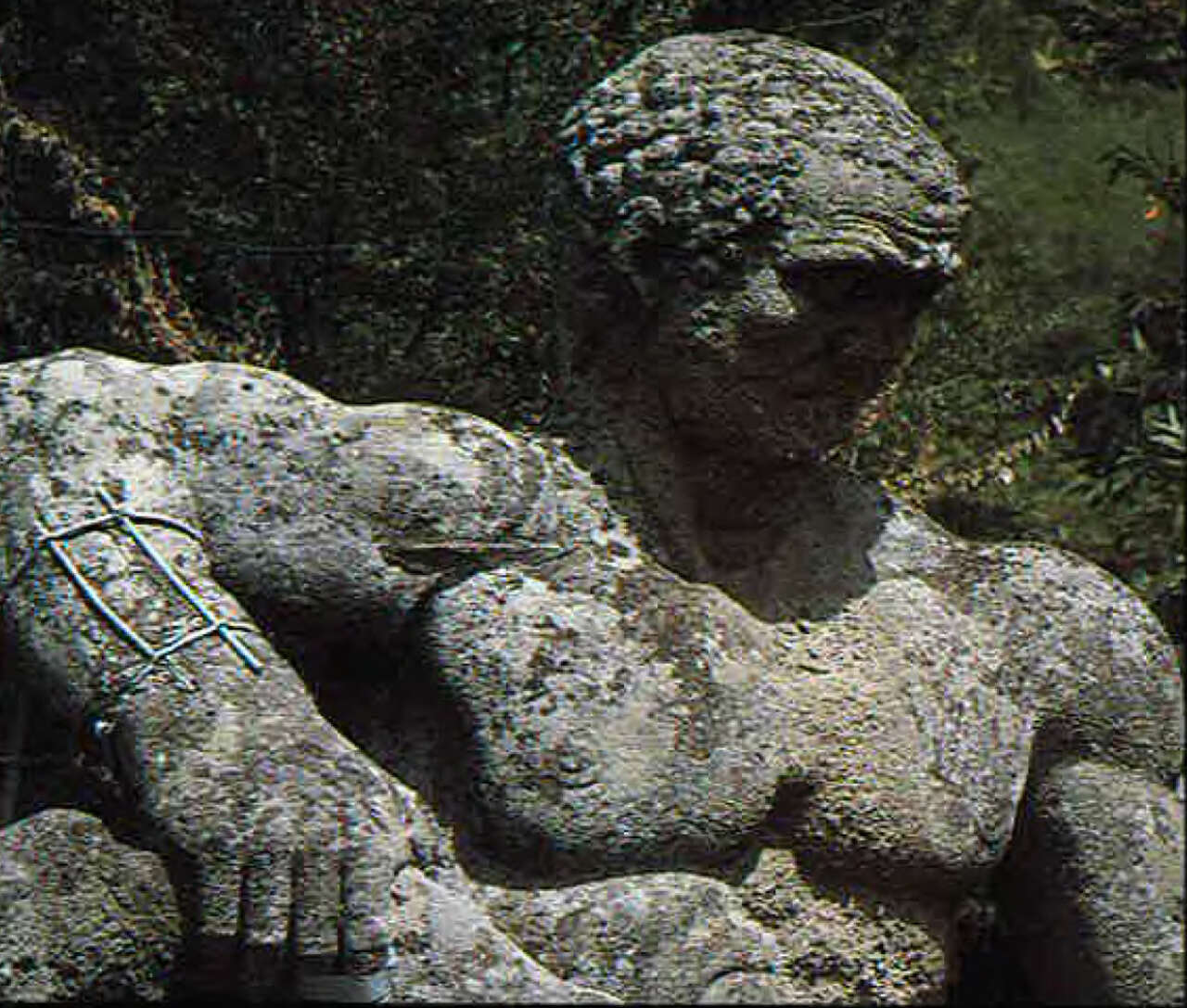 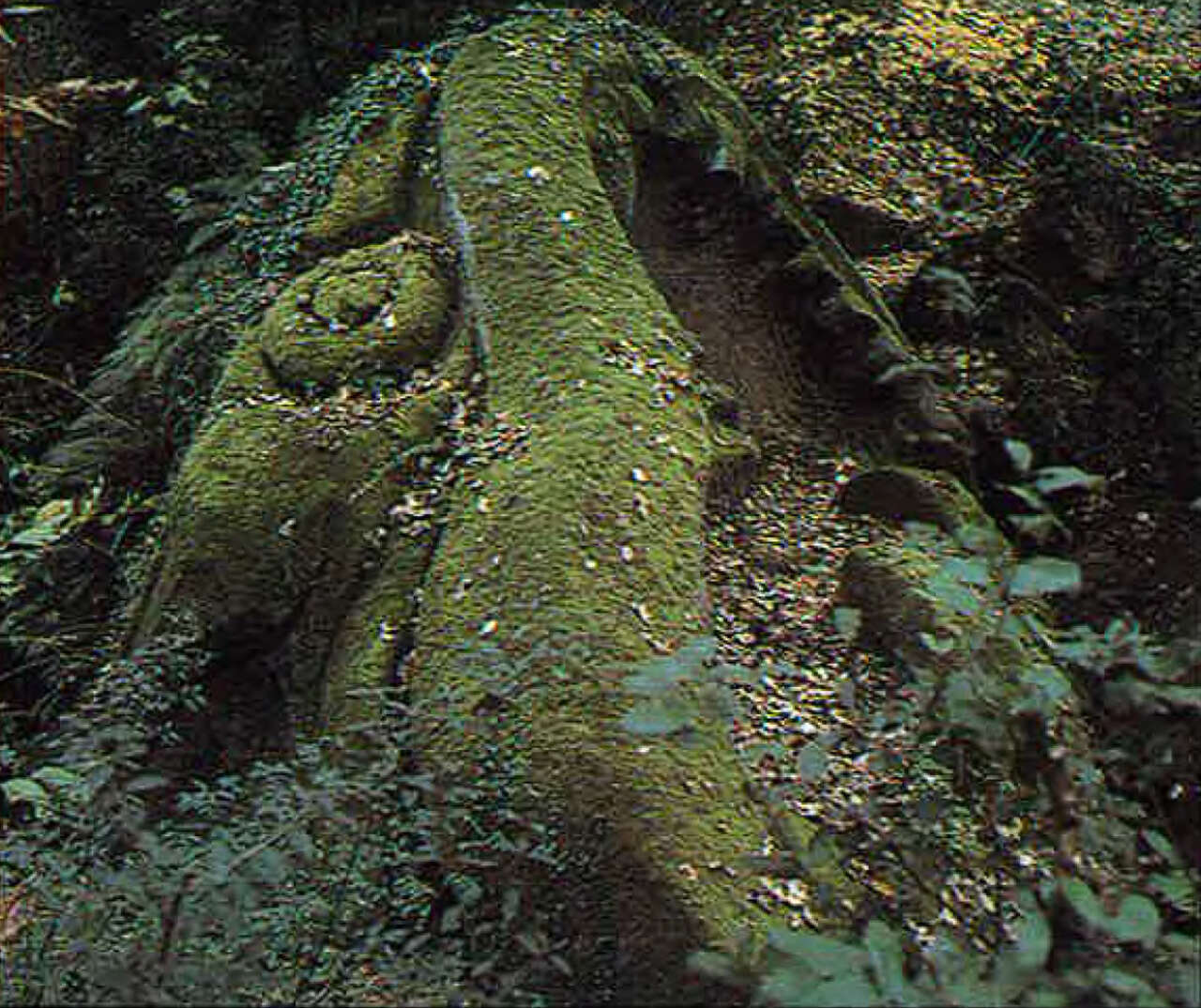 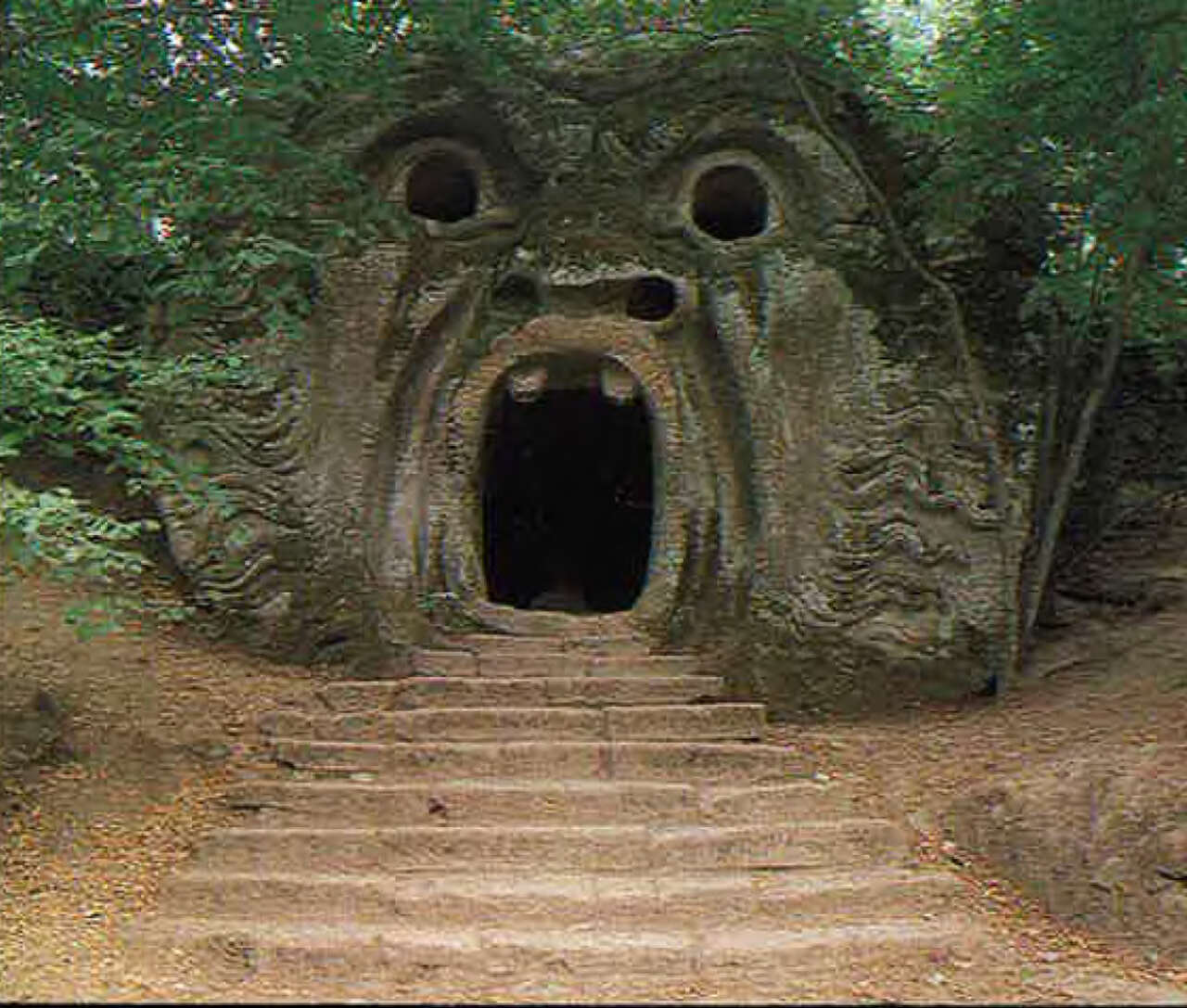 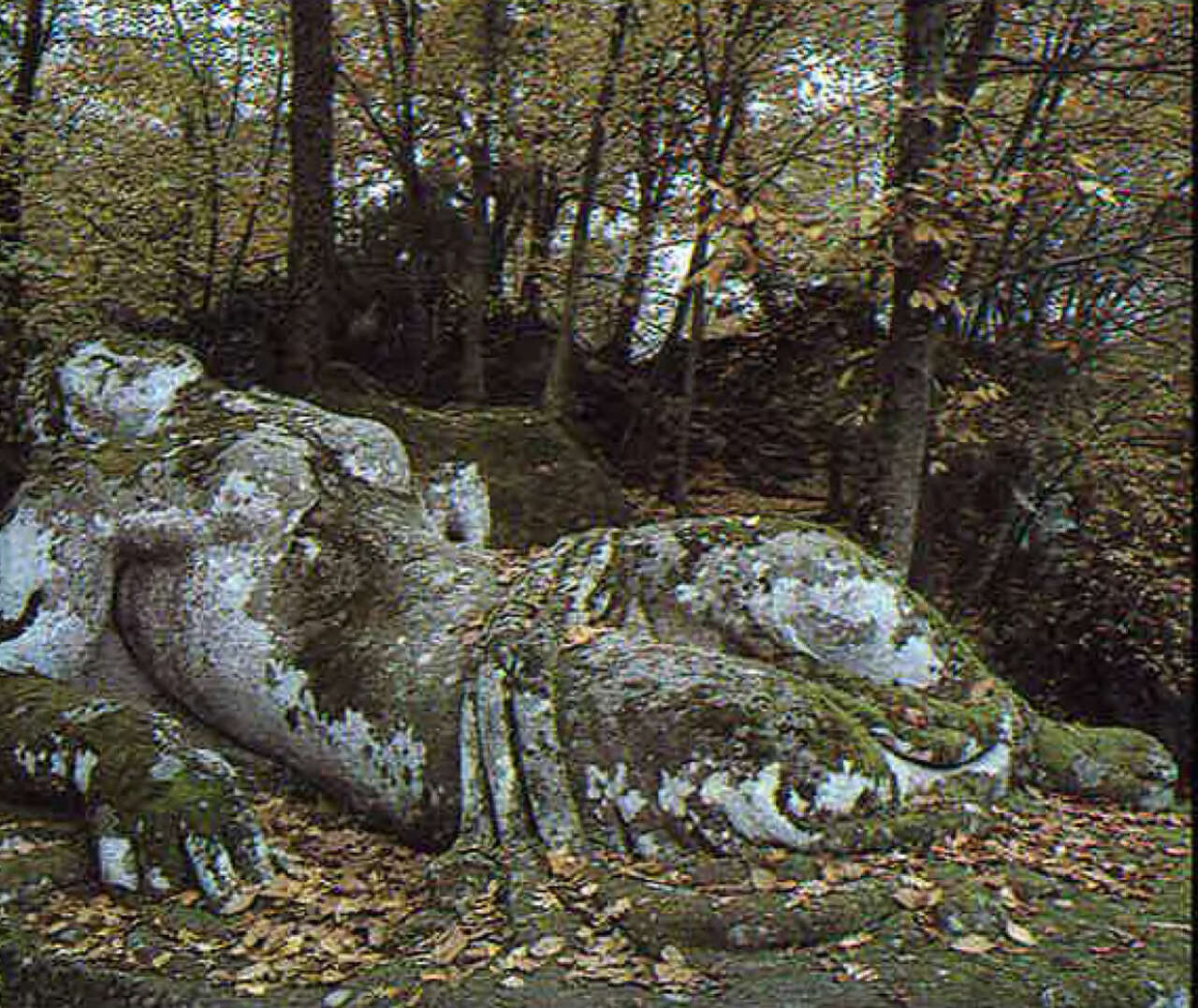 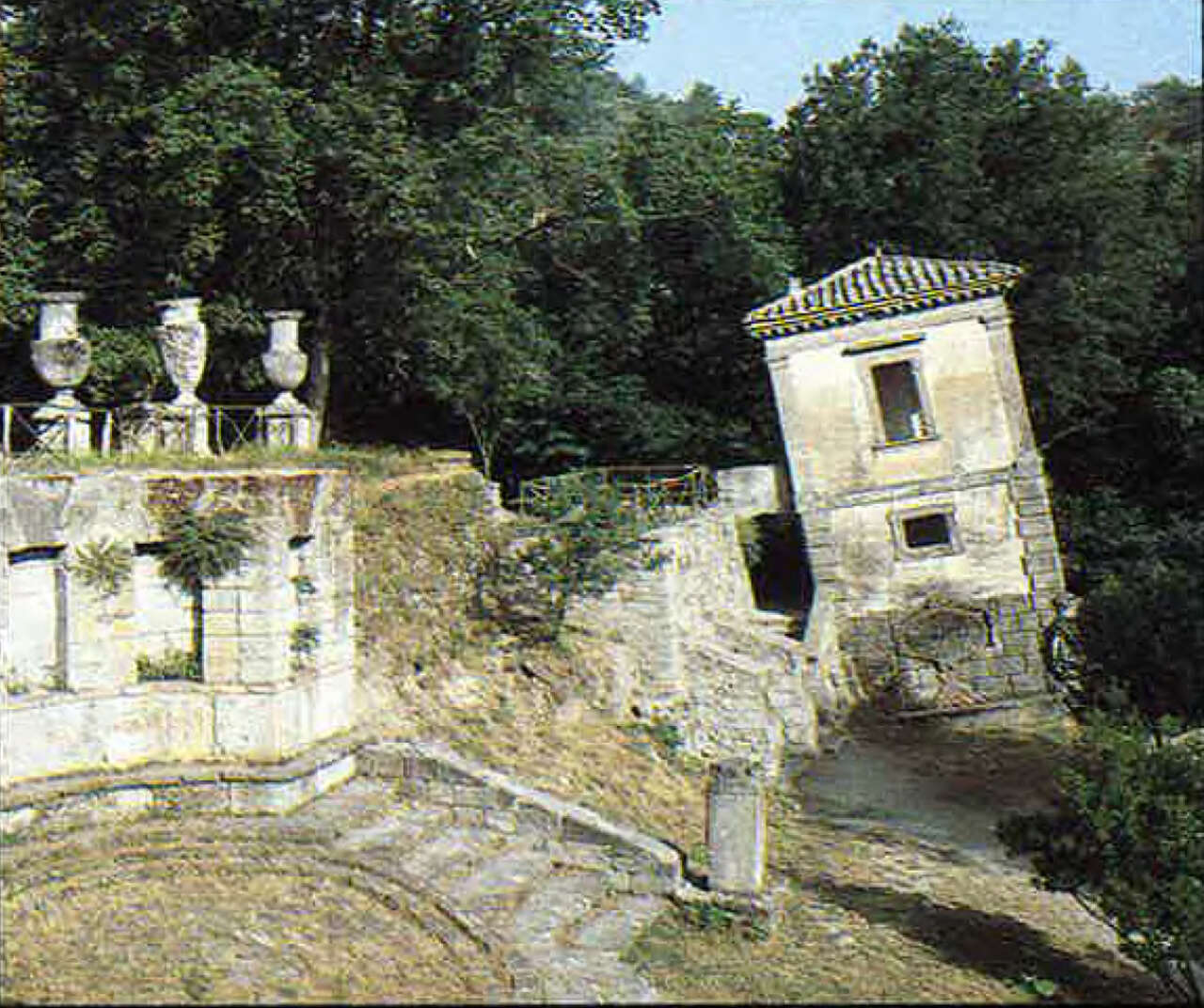 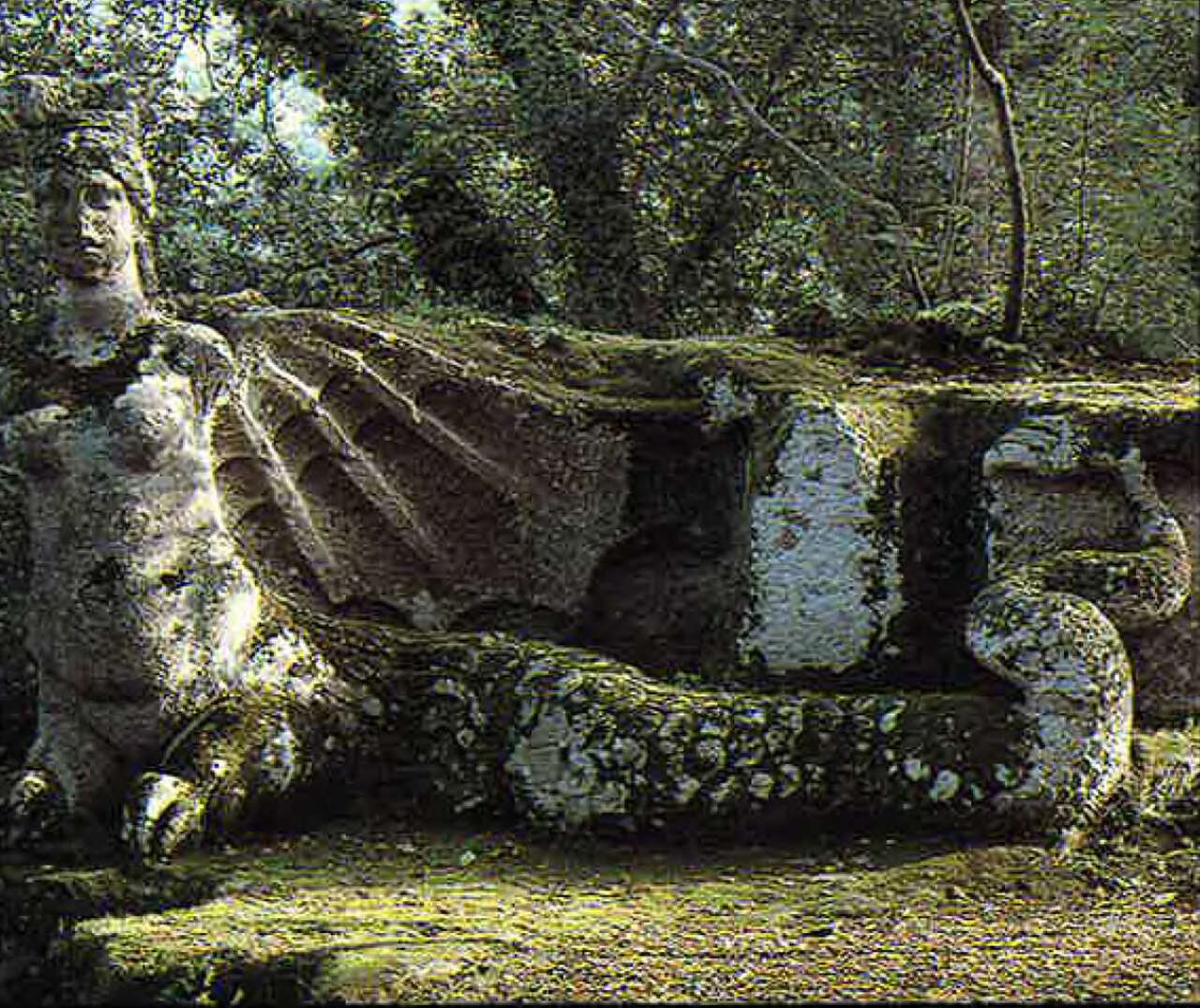 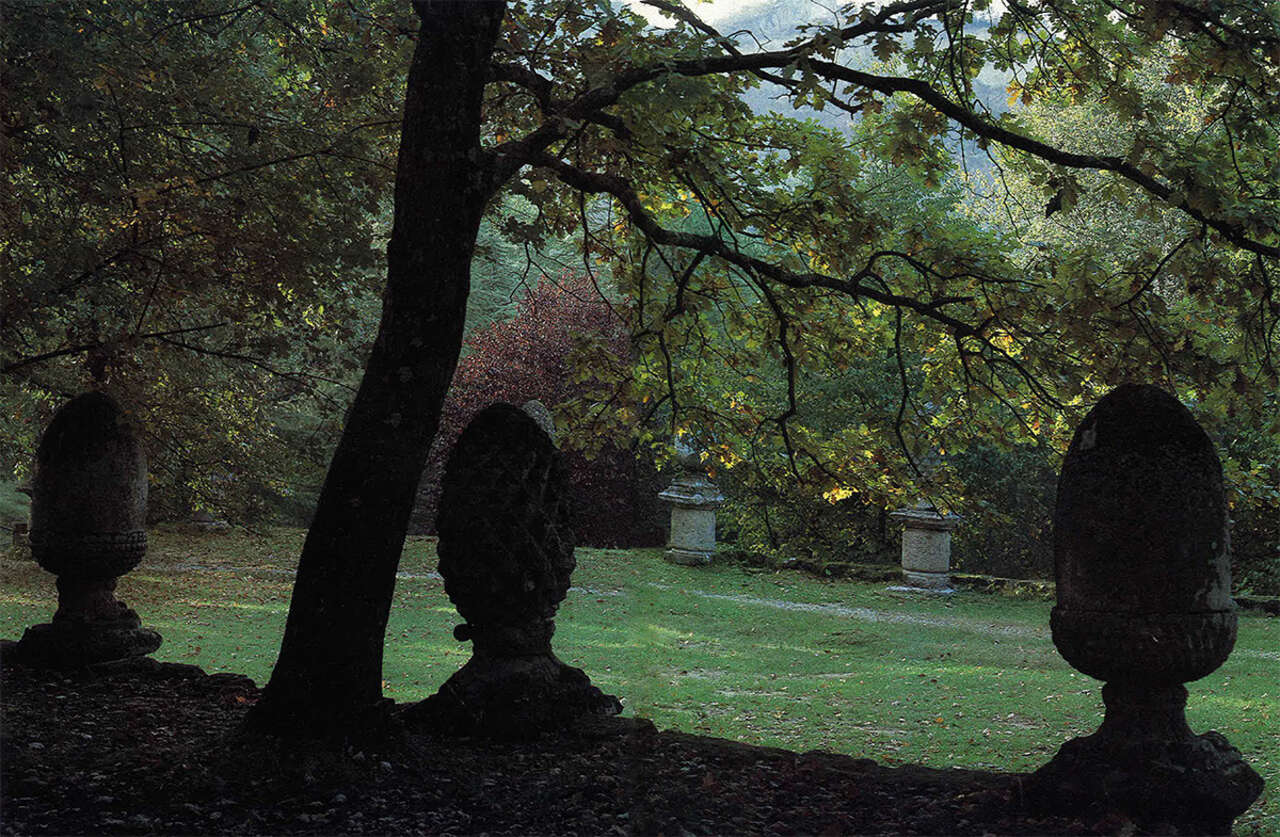 By car
Highway A1 exit Attigliano and continue for about 6 km on SP Bomarese up to Bomarzo.

The Sacred Wood of Bomarzo, or Park of the Monsters, as it is commonly called because of the presence of grotesque sculptures scattered around a woodland, was the brainchild of Prince Pier Francesco (called Vicino) Orsini in 1552.
The surreal landscape, like a natural amphitheatre, displays a menacing population of boulders. The rocks, carved on the spot, taking on the shape of terrible creatures, dotted along steep paths, among trees and wild vegetation. The wood, though partaking in full of the erudite architectural–naturalistic culture of the second half of the sixteenth century, is unique. It differs from the refined Italian Renaissance gardens in the absence of a logical order and a pre-established course. An authentic hermeneutic labyrinth of silences, allusions and illusions, the Park represents the life challenge of its eccentric creator, who desired to show how people dignified places and not vice versa. The diverse elements are freed from any perspectival bonds; nor are they conjoined by any coherence of proportion. Indeed, classical restraint gives way to constructing with gigantic elements a bewildering relation with Nature.
The nightmarish but also light-hearted quality of the magical forest are salient features of the chivalric romance which was fashionable at the time. A continuous reciprocity of poetic passages and iconographic inventions that permeates the park renders it a place in which art and literature converge. The imaginative criteria continue to elude even the most ardent scholars today, while the on–going complex maintenance and restoration work offers visitors to the Sacred Wood an itinerary to visit and discover it which is as close as possible to the prince's original idea. Indeed, in order to test the cultural skills of its users, Orsini carefully avoided any obvious explanation, introducing only riddles whose solutions must come from the visitors themselves.

Dogs entry is not permitted, but at the entrance of the garden you can find an area where you can leave them during your visit.

Pirro Ligorio (born: Naples, 1510; died: Ferrara, 1583), unlike the Tuscan artists, was completely immersed in the dominant antiquarian culture in Rome where he moved in 1534.

On commission by the Prince Pier Francesco Orsini he designed and oversaw the realization, in 1547, the Sacro Bosco of Bomarzo.

In 1561, he designed the famous map of Rome – an engraving published as the Antiquae Urbis Imago.

Working for Cardinal Ippolito d'Este, he worked at Villa d'Este and on its extraordinary garden between 1550 and 1569, creating a series of fountains which became the model for late Renaissance hydraulic art.

He was also a master of stucco-work, and left a wonderful example in Pope Pius IV's “Casina” which he created in the grounds of the Vatican.

Information
Opening hours
The park is open every day of the year with continuous hours, from Monday to Sunday
Closed on December 25th

www.sacrobosco.eu
Write to the gardenView the map