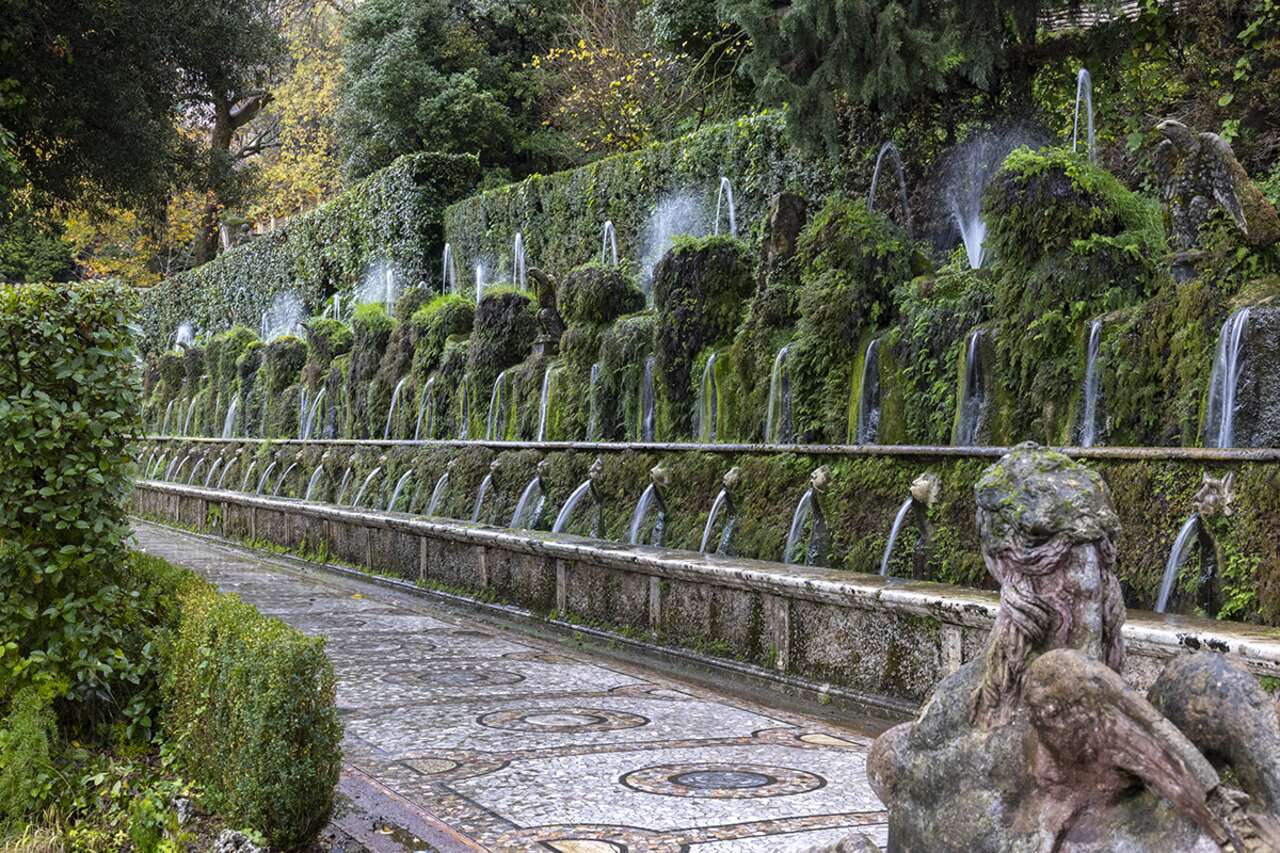 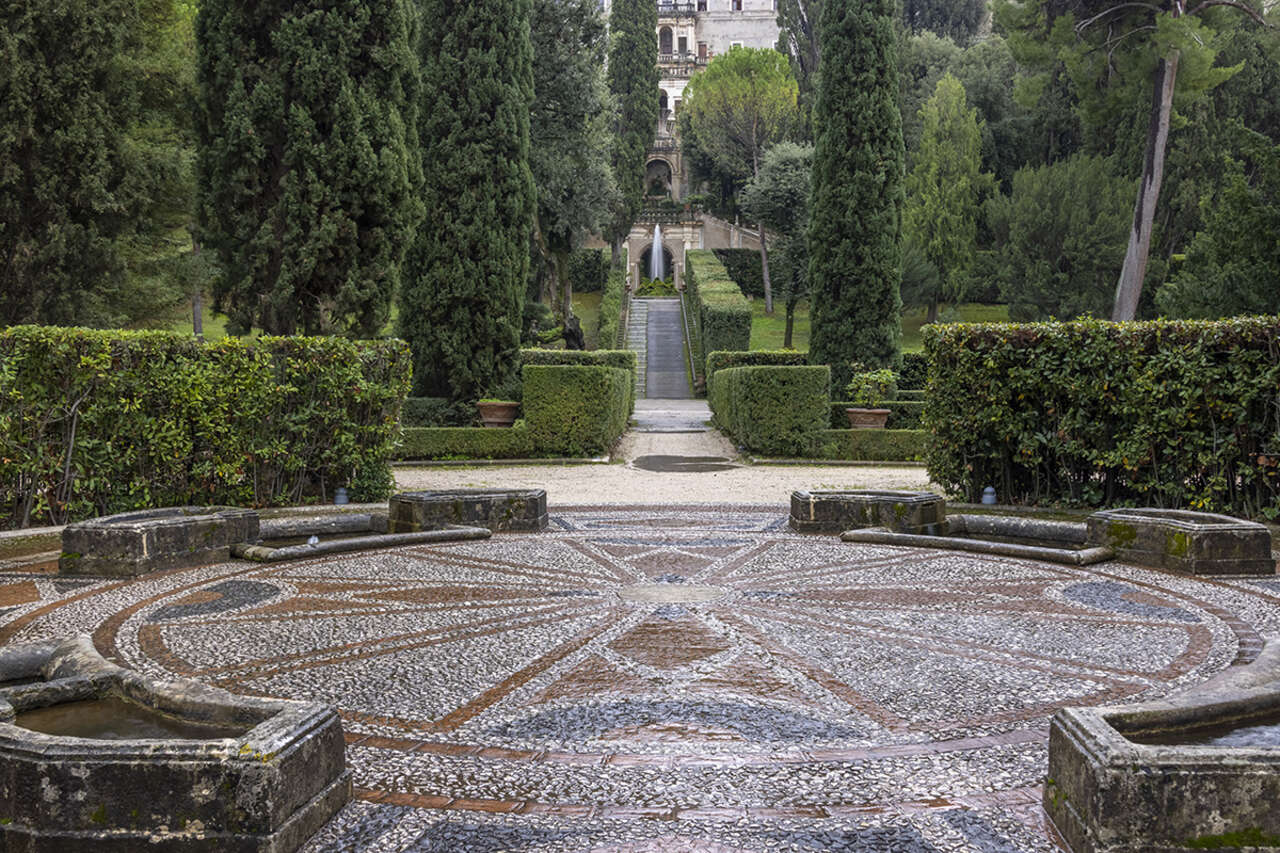 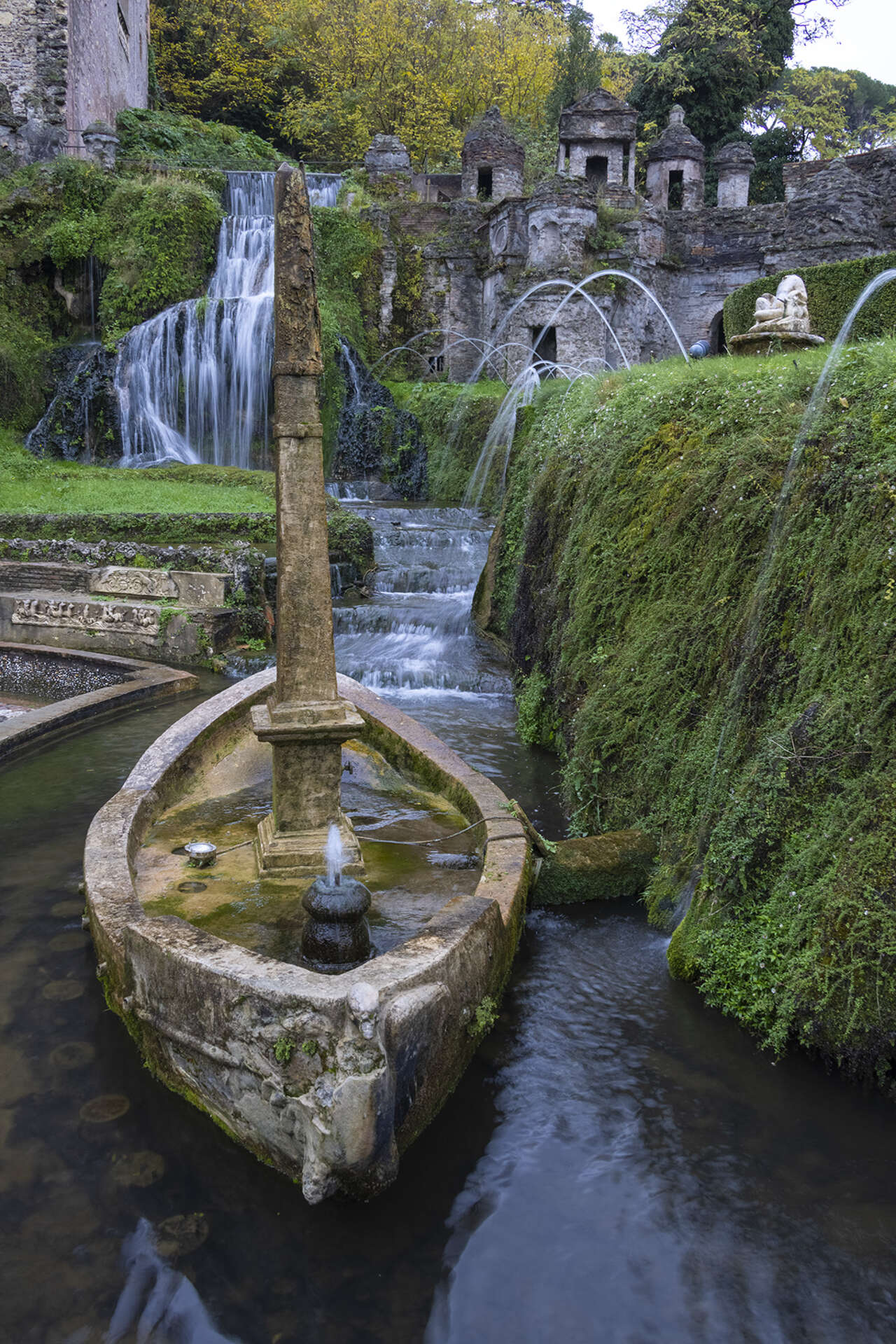 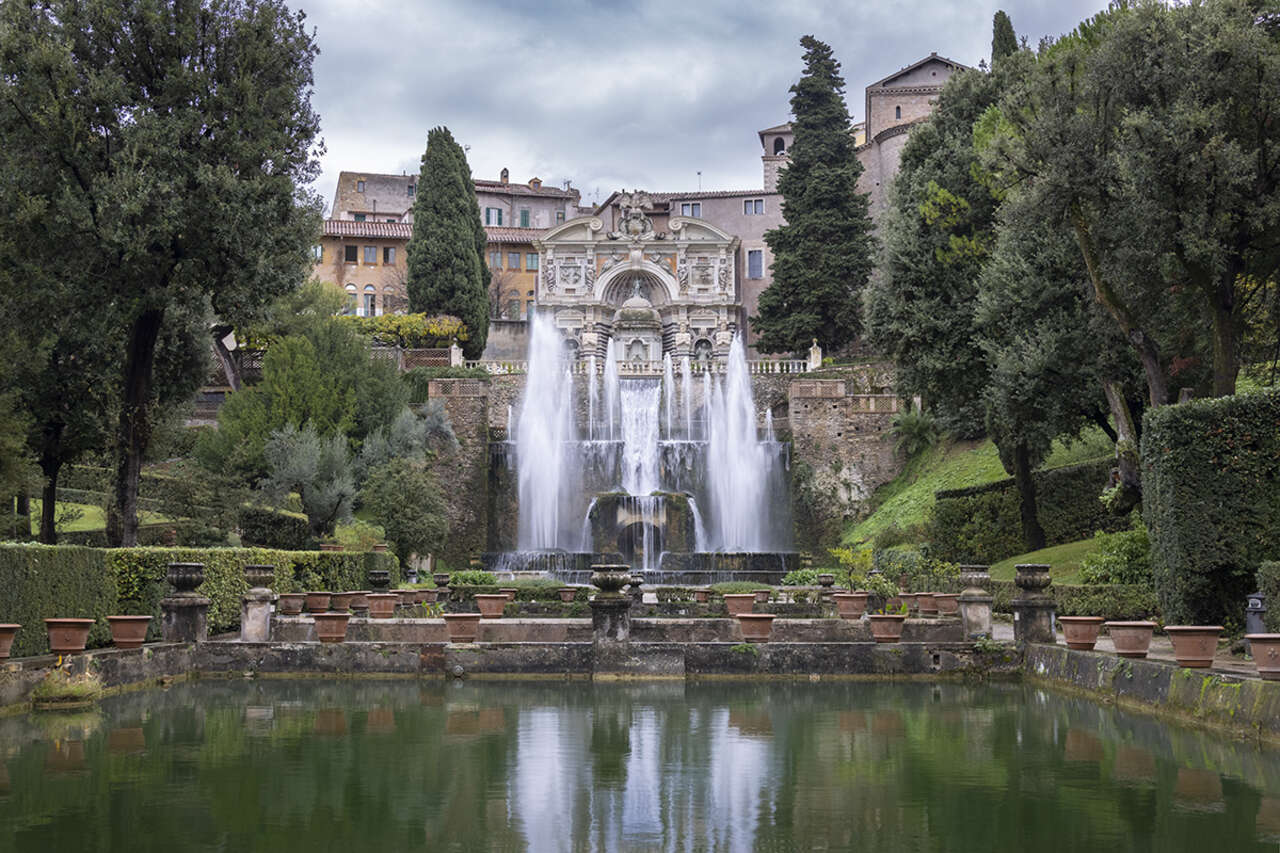 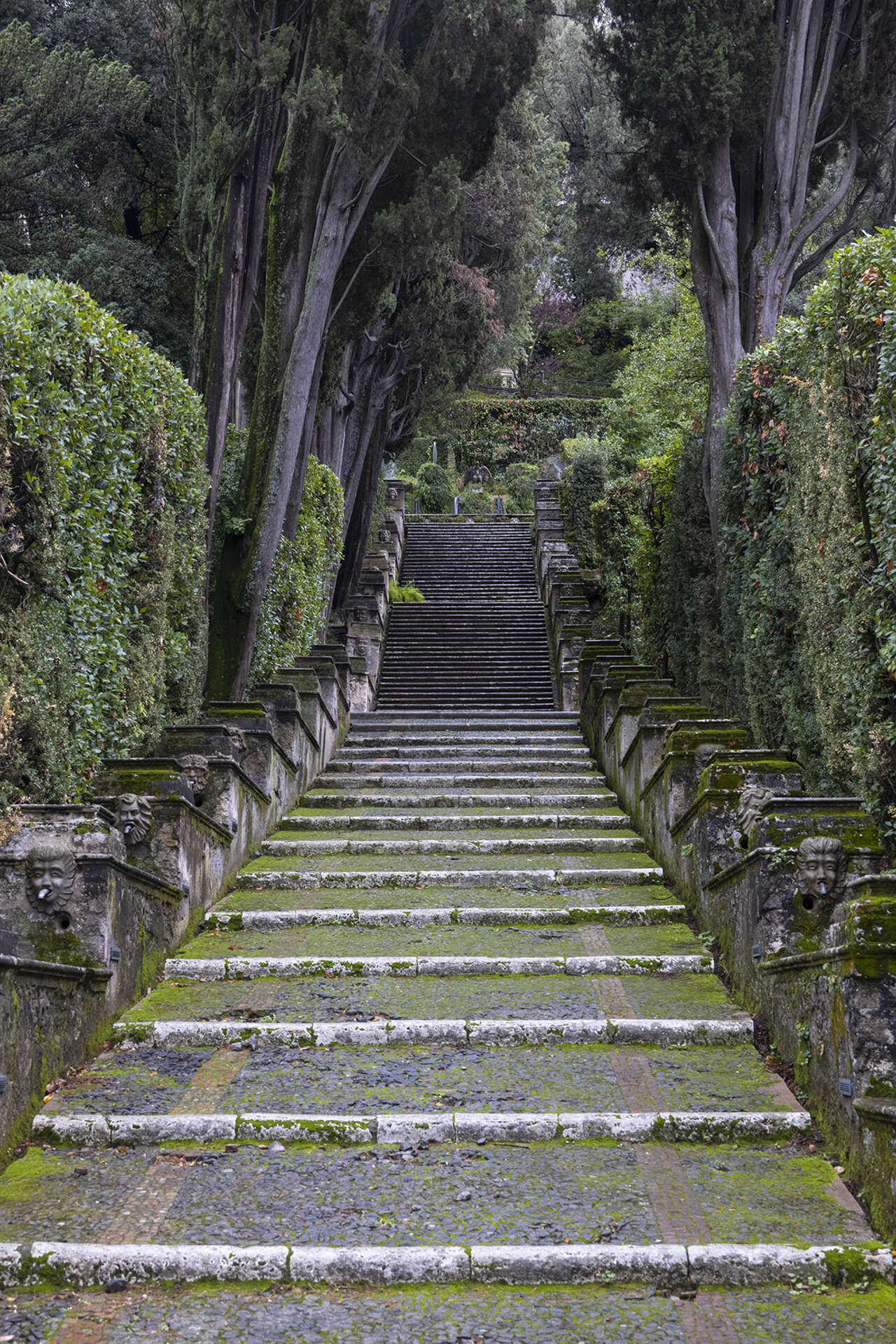 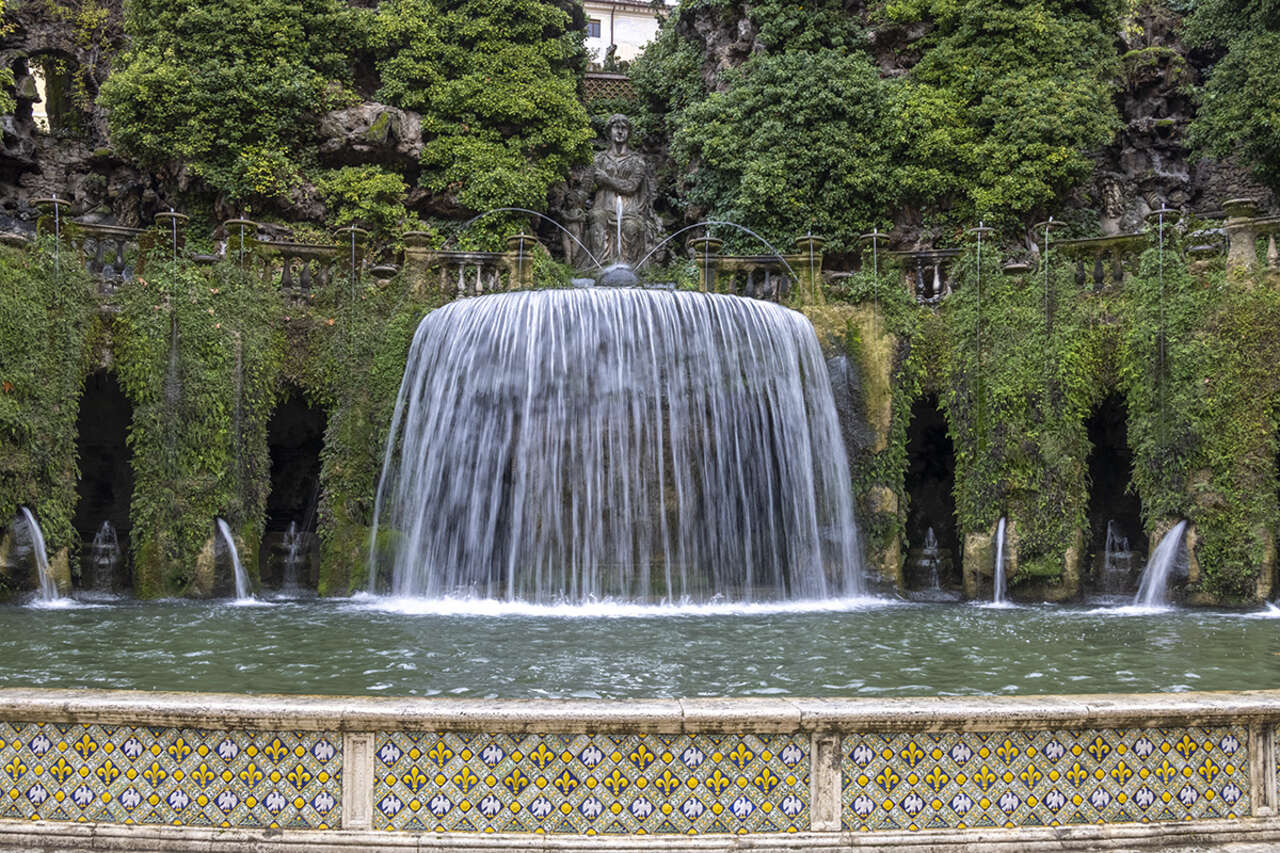 Villa d'Este, an Italian masterpiece of garden art, Unesco World Heritage Site, with its impressive concentration of fountains, nymphaea, grottoes, water games and hydraulic music, has been a source of emulation for several European mannerist and baroque gardens.

The prestige of the garden is even greater when its beauty is studied in the artistic, historic and landscape context of Tivoli, with ruins such as Villa Adriana in the fascinating surroundings of ravines, caves and waterfalls.
Cardinal Ippolito II d'Este, governor of Tivoli from 1550, revived the opulence of the courts of Ferrara, Roma and Fontainebleau, and gave the magnificence of Villa Adriana a new lease of life. The project by the painter-archaeologist-architect Pirro Ligorio was produced after 1560 to be eventually created by the court architect Alberto Galvani. It was almost completed on the death of the Cardinal in 1572 but unfortunately we have no records of its initial splendour since the precious furnishings and collection of antique statues has been dispersed. In the following centuries new important works were registered, involving great masters such as Gian Lorenzo Bernini. The decorations of the palace halls were organised by protagonists of late Roman Mannerism, including Muziano, Agresti and Federico Zuccari.

In spite of it having undergone a long spell of progressive neglect, plunder and decline, it became one of the essential, exclusive milestones of the Grand Tour from the XVIIth century and destination of artists such as Fragonard, Hubert and Turner. Since the end of the First World War Villa d'Este has been the property of the Italian State and in 2001 was registered amongst the UNESCO World Heritage Sites. In 2016 it became a fundamental part of the “Villa Adriana and Villa d'Este” Institute, which has undertaken an important restoration programme reaffirming the focal position of the site in the renaissance recovery of the tradition of the ancient garden.

By Car
From Rome: Take the A24 motorway, exit at the Tivoli toll booth, then proceed along the Maremmana Inferiore road until you reach the junction with Via Tiburtina. Now head towards the centre of Tivoli. Alternatively, you can take via Tiburtina directly.

From L'Aquila: Take the A24 motorway and exit at the Castel Madama toll booth. Proceed along via Empolitana, then via Acquaregna and follow the directions for the town centre. Pay attention to the restricted traffic areas.
Parking facilities: There is a multi-storey car park the near Rocca Pia a few hundred meters from Villa d'Este and another parking lot in Piazza Garibaldi (both subject to a parking fee).
Public Transport

By BUS from Rome
Take the subway, Metro B, and get off at the station of Ponte Mammolo, then take the Co.Tra.L. bus via Prenestina or via Tiburtina or via motorway (preferable) to Tivoli. Get off at the Largo delle Nazioni Unite stop (near Piazza Garibaldi) and proceed on foot for a short distance.
BY RAIL: from Stazione Termini or from Stazione Tiburtina until reaching the railway station of Tivoli. Now proceed on foot following the directions for Villa d'Este

Information
Opening hours
All year round, ever day, from 8:30am to 7:45pm
Monday opening at 2pm
The ticket office closes at 6:45pm

The entrance for visitors is on PIAZZA TRENTO, the compulsory exit from PIAZZA CAMPITELLI
Entrance
Full price: € 10.00
Concessions: €2.00

Booking is mandatory on the weekends and Holidays
Contact us
Piazza Trento, 5
00019 Tivoli (Roma)

villae.cultura.gov.it
Write to the gardenView the map